There are moles everywhere. And I mean EVERYWHERE. Moles probably rank #1 as the pest I’m asked about the most. Therefore, this is a very necessary blog. So here goes… A quick education on moles, and some myth dispelling.

– No, you don’t have moles because you have grubs. Moles eat earthworms first, and any other insect second – including grubs. I have no idea why every call I get tells me they must have grubs because they have moles. They are barely associated with each other. Although if you have soil rich with insects, they will come.
– It isn’t your neighbors’ fault that you have moles. It’s no one’s fault… and everyone’s fault at the same time. People tend to ignore moles and let them go for a few years, then attempt to go after them themselves, and finally, call for pest control. During all this time the moles breed and the populations get out of control.
– Moles come from your neighbors, from the woods, from across the street and from everywhere. However, I promise that blaming the neighbors is a futile act and trust me, the moles don’t care if Bob from next door is neglectful. Moles are opportunists and they will thrive wherever they are allowed to thrive. Including your lawn. So don’t let them go!
– Moles do not die in the winter. They just dig down deeper. It’s warmer down there. They come back to the surface when it warms up, even if it only warms back up for a few days in January.
– Moles are the pest that leave the dirt piles everywhere. Why? Because they are excavating their tunnels. When they dig, they must displace the dirt somewhere. That somewhere is the surface of your lawn.
– Does mole repellent work? Yes and no. It’s expensive as heck. Plus the silly bottles and buckets of product they sell don’t go far at all (ignore the square footage coverage claims on the label). Even if the repellent does its job and repels, it’s only TEMPORARY. Moles will either get used to the smell of the repellent and start coming back around or they won’t be bothered by it at all. Rain washes the repellent away quickly anyway. Sheridan Pest Control does not offer a mole repellent service.
– Where do all the mole tunnels go? Nowhere. A mole 10 years from now may find this year’s mole tunnels and use them. Why? Because moles are lazy, just like humans, and prefer to utilize an existing run instead of digging another one.
– Moles are not blind… but almost. Their strong sense of smell gets them to where they need to go. That’s evolution, baby. Their sight became less important over the centuries because they are 99% subterranean. They don’t need to see to eat and dig.
-Will moles go away on their own? NO! They will continue to multiply and ruin your lawn if you let them.
– Are moles a safety hazard? Yes. Why? Because the damage they do softens the ground and the potential for a broken ankle, hip, or leg is there. Some lawns feel like you are walking on a cloud… because the moles are EVERYWHERE. Be careful out there!
– Is there a poison for moles? Yes, but it’s dangerous to use. In fact, Sheridan Pest won’t use the in-ground poisonous worms because they often get lost, or a non-target organism may find a poisonous worm, eat it, and die. That isn’t far to the non-targeted organism. There are 20 poisonous worms per box. Some pest companies will just empty all 20, or more into the ground, flag them, collect your money, and leave. There is absolutely no control over those worms once they are planted in tunnels. ANYTHING can find them and eat them. NOTE: Sheridan Pest will decline service if a client is asking for this method.
– So how do you take care of a mole problem? Moles have to be trapped with partially underground traps. Yes, they are lethal traps. No humane trap has been invented yet. So unfortunately, moles are one pest that have to be trapped in a lethal manner.
– If you catch a bunch of moles for me this year, will I have them again next year? It’s possible. As stated before, the underground tunnels stay put and they will get re-used, maybe by your neglectful neighbors’ moles. So you may need service yearly but you may not… it depends on the mole population.
– I keep finding moles in my pool strainer! Those are probably shrews. Similar pointy noses, but smaller front paws. If moles played baseball (they don’t) they would probably be great catchers.
– Moles are not eating your plants, but they may be killing them indirectly by tunneling under them.
– Moles are loners and only mix and match to mate.
– Moles typically live 3-5 years.
– Mating season for moles is late winter. Litters usually consist of 2-5 pups. Pups leave the nest and go out on their own after 30 days.
– Moles can dig 15-18 feet in 1 hour!
– Noise makers, cinnamon, gasoline, flooding the tunnels, moth balls, silly repellents, soap, etc. DO NOT WORK. Save yourself $127 at Lowe’s and call Sheridan Pest first!
– Much of the Capital Region resides on sand. Moles (and many other pests) can breeze through sand as if it was air.
– Please stop pouring insecticide on your lawn in hopes of driving the moles away. Again, they aren’t around because of grubs AND granular insecticide is often limited to what is called a “surface kill.” Meaning that it could kill some insects on, or just below the surface, but granular insecticide won’t touch insects deeper in the ground. In other words, it’s a waste of money if your goal is to get rid of your mole problem. 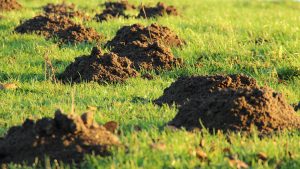 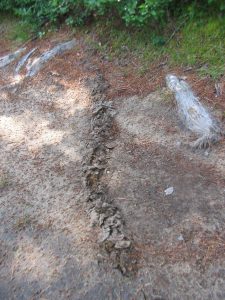 Many pest control companies won’t offer a mole service. Why? Because moles are hard to catch! Well, for some companies they are, but for Sheridan Pest, it’s business as usual! Sheridan Pest caught well over 225 moles the past 2 years and is looking forward to another HUGE year this year helping folks tackle their mole issues. Call for help! Let’s get after them!
By the way – mole trapping starts in mid-April. Once the ground is consistently warm enough, we get out there and go!